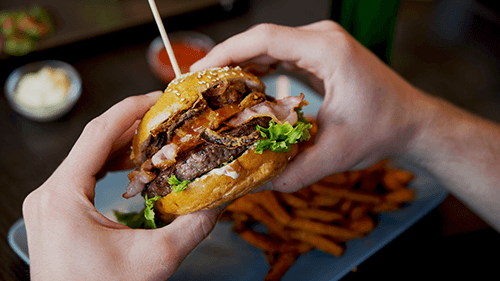 There are a variety of people, countries, and cuisines that take credit for the invention of the hamburger. It’s difficult to pinpoint the exact origin of the burger, but most experts believe that the hamburger was created between 1885 and 1904. There is one common thread between all stories; was invented out of necessity to feed people on the go and stay relevant.

In the 13th century, the Golden Horde and his cavalry charged into battle, led by Genghis Khan. They moved with high speed across the vast kingdom of Asia and modern day Russia. They did not have the luxury to stop for meals, so they rode and ate. They wrapped a few slices of meat under their saddles. The saddle friction tenderized and cooked the meat, creating a hamburger type patty. Though difficult to imagine, some say that the Mongol Empire deserves credit for the hamburger, the king of fast food.

Canton, Ohio is not only the home of the NFL hall of fame but also home to the birth of the Hamburger. Frank and Charles Menches were food vendors at the 1885 Hamburg Fair. The story goes, that Menches ran out of the signature pork sandwich, and the local butcher suggested ground beef as an alternative. Served with sliced onions and ketchup and the with great success they named the new sandwich, the Hamburger. To this day, September 18 is considered “National Birth of the Burger Day.”

In 1885 another food legend came to light — Charlie Nagreen, a 15-year street vendor at the Outagamie Fair, in Seymour, Wisconsin.  Nagreen was unsuccessful selling Hamburg Steaks because customers could not be bothered to take time and sit down for a proper meal. Nagreen decided to flatten his steaks, and wrapped them between two slices of bread, creating the “Hamburger Charlie.”  To this day, the invention is honored every year with a burger fest, held in his honor.

Another honorable mention includes Fletcher Davis of Athens, Texas. Davis claimed to have invented the hamburger in 1880. Davis opened a lunch counter in Athens and served a ‘burger’ of fried ground beef patties with mustard and Bermuda onion between two slices of bread, with a pickle on the side.

It is difficult to pinpoint when or who created the burger, but one thing is for sure; the burger has grown into a titan of the food world. Americans eat nearly 50 billion burgers a year! That’s enough burgers to wrap around the Earth thirty-two times.